A midstream gathering company operating in the Eagle Ford Shale contacted RSI to evaluate a crude oil pipeline that recently experienced a failure due to a paraffin plug. At the time of the failure, it is important to note that throughput was established to be zero. Attempts were made to unplug the pipeline using hot water, paraffin solvent, and bi-directional high pressure with no success. 1000’ of pipeline was replaced and the focus turned towards treatments to prevent future failures.

Oil and wax samples collected from the pipeline were characterized using a series of ASTM methods, with this information a risk assessment was organized. Below are pipeline parameters and crude oil characteristics.

Carbon Chain Distribution (CCD) was determined using Gas Chromatography. The results below explain the high melting point observed during the DSC analysis. 22% of the total sample was characterized above C 60 while >5% was above C 100. 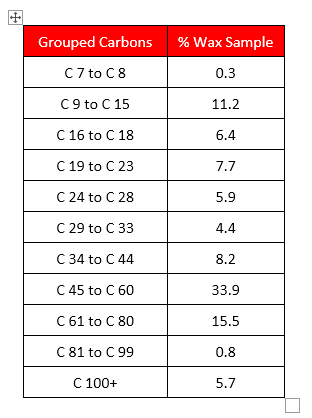 Using the information acquired above in conjunction with a series of cold static jar testing, RSI tested a multitude of different dispersant chemistries. RSI-1092 performed superior in all aspects of testing.

RSI-1092 has been used to treat this crude oil pipeline more than two years. No pressure differentials, wax deposits on coupons, nor failures have occurred. Wax returns during pig runs diminished to almost zero shortly after implementing RSI-1092.

SDS and PDS sheets can be supplied upon request.

Back to Case Studies & News Listing